Networking is an important way of marketing yourself, or your organisation and its products or services. Getting to know the right people and having the right contacts is essential for doing good business. There seems to be truth in the old saying: ‘it’s not what you know it’s who you know’.

There are many benefits of networking. Here are the main ones:

Internal networking (inside your own business or organisation) and external networking (at social clubs, meetings, functions, conferences, clients’ meetings and functions, etc.) are planned events or gatherings which all have the primary goal of connecting and building lasting relationships with other people.

Network with people who …

Networking ‘down’ and ‘sideways’ is just as important as networking ‘up’, because your peers may be promoted before you are, or they may leave the organisation and become major clients. So network with people who don’t seem to matter as well as with those who definitely do matter. The person you shun today might end up being your boss tomorrow!

Make a list of people in your organisation that you should network with and list your objectives regarding each of them. (These may change from time to time.)

Be careful not to go over your boss’s head by networking with your boss’s clients without his or her knowledge or consent.

Try to have at least two networking meetings per week and set up the appointments early. These could be a meal or a drink (which could even be at your home), a round of golf, a cup of coffee—in your office or theirs, or in a coffee shop. Be sure though to have a good reason for the meeting so that the other person feels valued. Keep their interests in mind; don’t let them feel that you are wasting their time.

The chat you have with someone at the photocopy machine, in the kitchen or while waiting for a taxi can also be networking. There are literally hundreds of ways and opportunities to network and build relationships with others—you don’t have to be senior staff to start networking. In fact, if you are a junior member of staff I strongly recommend that you start networking as soon as possible, especially if you have ambitions to improve your life by furthering your career.

Make an effort to build lasting relationships. There is no point in making only one contact with someone you hope will be a new ally. Stay in contact. You could also invite some like-minded people to get together for a networking meeting or a drink, to introduce them to each other. Write reminders in your diary.

Be honest with everyone you come into contact with. Never gossip or complain. Gossiping and complaining can seriously harm your image and your relationships.

Remember that others may want to network with you. Be available.

Visit or join organised networking groups, as well as other clubs, forums, committees and organisations, but keep in mind that this will not be effective unless you use the opportunities they afford. Through these groups you will become known to more and more people, as well as getting to know more and more people yourself. People will start referring you to others and you should do the same for them. Personal introductions and referrals are extremely valuable and highly effective.

Some guidelines for networking

Before any meeting, set objectives for the meeting—and then make sure that you achieve them. Keep in mind, however, that you will not always achieve the desired objectives with every meeting—there is nothing wrong with that. Not every potential networking partner will end up serving you in some way—or you them. Accept this and move on.

To make the most of networking, here are a few guidelines you should follow:

After a meeting, follow up with the potentially useful people you met. If someone was interested in your work or your company, don’t wait two or three weeks to drop them a line; they may have forgotten you by then.

Be reliable, and keep all the promises you made. If you promised someone that you would call them with some information, or that you would do something for someone, make sure that you do it.

Be willing to introduce your network partners to each other—and ask them to do the same for you.

Make sure your network partnerships work for you. Concentrate on the relationships that result in good outcomes.

Be willing to reciprocate, because networking is a partnership.

Do not network with people who are involved in any illegal activity or who are potentially dangerous in any way. People think of you in relation to those you associate with, so make sure that your network contacts are upstanding members of society.

Networking can be expensive in terms of drinks, meals, fees, etc., but if it is done effectively it can be a highly valuable investment in your own and your business’ success. It does not really have to be costly though—having coffee in someone’s office is an inexpensive way to network which can be perfectly effective. As long as your intention is to build lasting, sincere relationships, it shouldn’t matter where you do your networking. 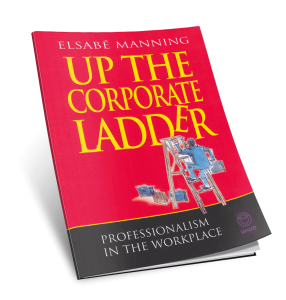 Order your copy of UP THE CORPORATE LADDER by Elsabe Manning today!